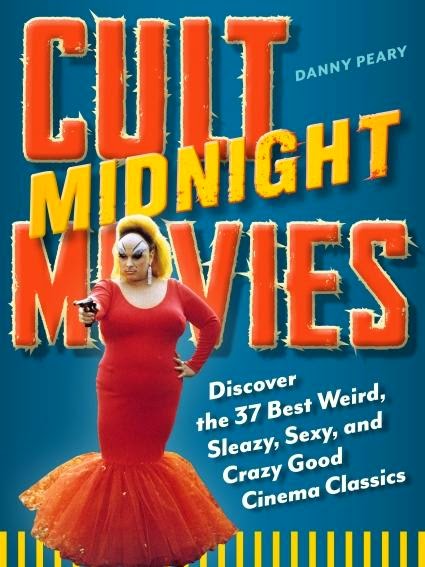 I'm delighted that Danny Peary's essays about cult movies are now available in eBook form. It's hard to explain just how important Danny Peary's books were to me as a movie-obsessed teenager. In a pre-Internet world, I relied heavily on the library for information about films and the stars I loved. It was there that I discovered Peary's now legendary Cult Movies, a book of informative and strongly opinionated reviews about unusual films with a devoted following.

Now an updated and edited selection of Peary's essays from his previous books are available in four new eBooks: Cult Crime Movies, Cult Horror Movies, Cult Sci-Fi Movies and Cult Midnight Movies. Priced at $5 and lower, they are a must-buy for any fan of bizarre movies and thoughtful film criticism. I've now bought all of them, but the Cult Midnight Movies compilation was my first look at the series.

I wondered, with all that I've learned about movies in the decades since I first picked up Peary's book, how I would respond to those essays. My original reaction was astonishment to even learn these movies existed. Now that I've seen most of the films covered here (the book appears to cover titles from all three Cult Movies books), the details are familiar, but the writing still blows me away.

Peary is remarkably suited to writing about movies. He possesses the knowledge of an academic, but reading him is more like hanging out with your cool, smart friend who doesn't take himself too seriously.

Having seen these films in the theater, before home video existed, Peary can add the audience experience to his views, which makes his essays as much a commentary on the times as the films inspired by them. He knows his film history and in making comparisons to other movies, he can make your "to watch" list grow to ridiculous proportions.

Peary is an independent thinker. He doesn't hesitate to go against critical or audience acclaim to take filmmakers to task for being pretentious (I loved his take on El Topo: "that this film is beyond our comprehension doesn't make it profound"). If he can't understand why a film has won a cult following, he'll explain exactly why. Even if you don't agree with him, you are bound to respect his opinion.

A lot has changed since Peary first started writing about films, but his criticism remains fresh, informative and entertaining. I'd recommend his books to anyone who loves movies, but particularly to newer fans, because it captures the wonder of those movies that attract a cult following, and that feeling has inspired me over many years of cinematic obsession.

Many thanks to Workman Publishing for providing a copy of the book for review.