The Picture of Dorian Grey on Blu-ray 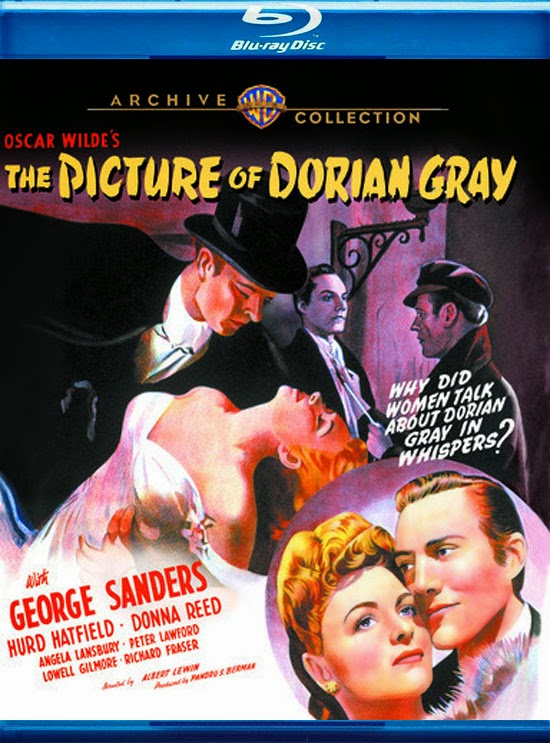 Actor Hurd Hatfield sealed his doom in Hollywood with his second film role, where much like Anthony Perkins in Psycho, he was almost too effective. As the star of The Picture of Dorian Gray, he not only horrified audiences, but people in the industry who could not separate the man from his performance. His elegantly cold portrayal of Gray can now be enjoyed on a new Blu-ray from Warner Archive.

Gray was Oscar Wilde's only novel. The dark tale created a scandal when it was first released in serial form in a magazine. When the chapters were collected into a book, the author wrote a preface in which he defended his art so eloquently that it became nearly as famous as the story it introduced.

Here Wilde's horror drama has been translated to the screen with all of its unease intact. The film was remarkably intense for its time, with very little to relieve the bleakness of its story.

Dorian Gray is a young, wealthy man in London. He poses for a portrait by his friend Basil Hallward (Lowell Gilmore), an experience that mysteriously unsettles the artist. He decides never to exhibit his work.

The devastatingly witty Lord Henry Wotton (played by George Sanders, because otherwise there would have been riots), also admires the portrait. Inspired by its beauty, he talks of enduring youth, and the pursuit of pleasure with such passion that the impressionable Grey decides he wishes to always appear as he does in the painting. The moment leads him to a life of soulless hedonism.

Hanging around an opium den, bringing shame to high class ladies and disturbing all of London with his never-changing visage, Grey inspires fascination as well as horror. He wins the heart of a humble singer (Angela Lansbury), but then subjects her to a cruel test of supposed decency that she is too in love to pass to his satisfaction. Watching his songbird crumble, with her soft trembling up do and perfectly placed heart locket, you feel the warmth go out of the movie.

While his appearance remains unchanged, Dorian's dark deeds are recorded on his mysterious portrait, which he keeps under lock and key. In four brief shots, the ever-changing painting is shown in bright Technicolor. These moments are startling: the first glimpses are deeply sensual as you gaze upon Gray's beauty. Later views are sickeningly florid as the image becomes that of a bloodied monster.

While nothing in the production has quite the shock value of those portrait shots, it is an effectively eerie film. Hatfield's distance from the rest of the human race is captured in long shots, where he is out of focus in the distance, on the edges of normal life. Slightly off-kilter framing and other unexpected compositions help to communicate the feelings of unease and confusion Dorian causes in those around him.

Hatfield is the stand out here, perfectly cast as the handsome, but otherworldly Gray. Lansbury is the perfectly pure counterpoint to his emptiness, all warmth and acceptance. In between is the always wisecracking, but secretly decent Lord Henry, who seriously could not have been played by anyone by Sanders.

I was especially taken by Donna Reed's performance as the daughter of the portrait's artist. She is in love with Grey, or at least under his spell. Though she is known for playing characters with warm domesticity, Reed could have a bit of an edge, a hardness in her eyes. She plays that quality to good effect here, never screaming when a lady should and refusing to be oversentimental when her dreams of love disintegrate. The part could have easily been played by a bland ingénue, but the movie is much more powerful because of her interpretation.

In my research of Hurd Hatfield, I found it interesting that, much like Grey, he stayed remarkably young looking throughout his life. Though he didn't last long in the movies, he did have a long television career. Hatfield's relationship with Lansbury had a much better outcome offscreen; the two were life-long friends, and he even purchased an estate near hers in Ireland.

While the actor always regretted the impact his most famous performance had on his career, he did make a unique contribution to film as Gray. In a movie with a style and themes ahead of its time, his presence was timeless and unique.

Special features on the disc include a trailer, a Tom and Jerry cartoon and a fascinating short documentary about a pioneering mental health professional. Screenwriter and film historian Steve Haberman and Angela Lansbury provide the commentary track.