Retro Book Review--A Tree is a Tree, The Autobiography of King Vidor 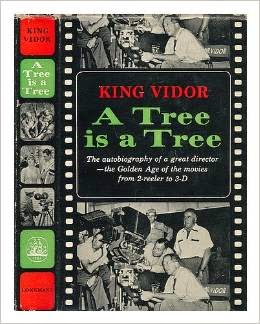 I've never been able to understand why King Vidor remains an admired, but still strangely unsung director. His films are legendary: The Big Parade (1925), The Crowd (1928), Hallelujah (1929), The Champ (1931), Stella Dallas (1937) and Duel in the Sun (1946), and even the farm scenes in The Wizard of Oz (1939) among them. It's as if his rhythmic, socially attuned style is almost too sophisticated, too subtle to attract the attention it deserves.

Vidor was making films before anyone quite knew how they worked, documenting natural disasters and marching soldiers in his home state of Texas. By the time he made his last film in 1980, the documentary short The Metaphor, his career had lasted so long that it warranted an entry in the Guinness Book of World Records. He endured because he was determined, flexible, curious, socially-tolerant and always eager to adapt to the times.

For this reason I was thrilled to find an original UK edition of Vidor's classic autobiography in a London bookshop, when I took a trip across the pond several years ago. As often happens with the books in my own library though, it was ignored for a while. This year I decided I had to get to it.

Vidor's story is really just a personal take on the progress of moviemaking from the silent age, through the studio era to modern times. While he mentions his friendships with people in the industry, giving significant space to his personal connection to the stories of stars like John Gilbert and Mabel Normand, the director mostly writes about the process of his his work. Even his three marriages, though to women in the industry, are only given a few lines each.

Perhaps focusing on business was a wise choice though, because Vidor was not dramatic himself. He worked steadily, making projects for himself whenever the offers dried up; the director spent his money wisely and apparently never picked up any bad habits like drinking, gambling or womanizing.

This is not to say that Vidor's life was dull. He finds spice in his stories about life on set, where particularly in the early days of film getting a film made could be more exciting than the final product. No man who has been nearly shot by John Gilbert, been attacked by gypsies on a cross country drive and seen as many changes in the movies as he did could be said to have lacked for thrills.

Vidor was the most adaptable filmmaker of his generation, eagerly exploring each new innovation and trend of the industry. The director approached talkies, Technicolor, widescreen and increasingly complex modern productions with the enthusiasm of an early adopter, always changing before he was forced to go with the tide. It is this impulse, along with an ability to similarly go with the flow when studio bosses made demanding requests, that accounts for his remarkable longevity.

Maybe Vidor could have made a few more classics if he'd had a bit more fight in him, but it is clear that despite his laidback way with his employers, the director had a remarkable amount of control over the projects he made. It is likely because of the high quality of his material that he remained so absorbed in his work, relishing the challenge of creatively handling production problems. He seemed to especially have enjoyed the excitement of filming with a tight budget during the silent days, where sometimes the entire cast an crew could fit in a large car.

Vidor ends his book thirty years before his death. He has yet to film Man Without a Star (1955), War and Peace (1956) and Solomon and Sheba (1959). He will be nominated one more time for the Academy Award for best director, and he will receive an honorary award from the Academy in 1979. However, the scope of Vidor's story feels complete, because he essentially covers the birth, life and slow death of the studio era. It should be a fascinating read for anyone interested in Hollywood history.