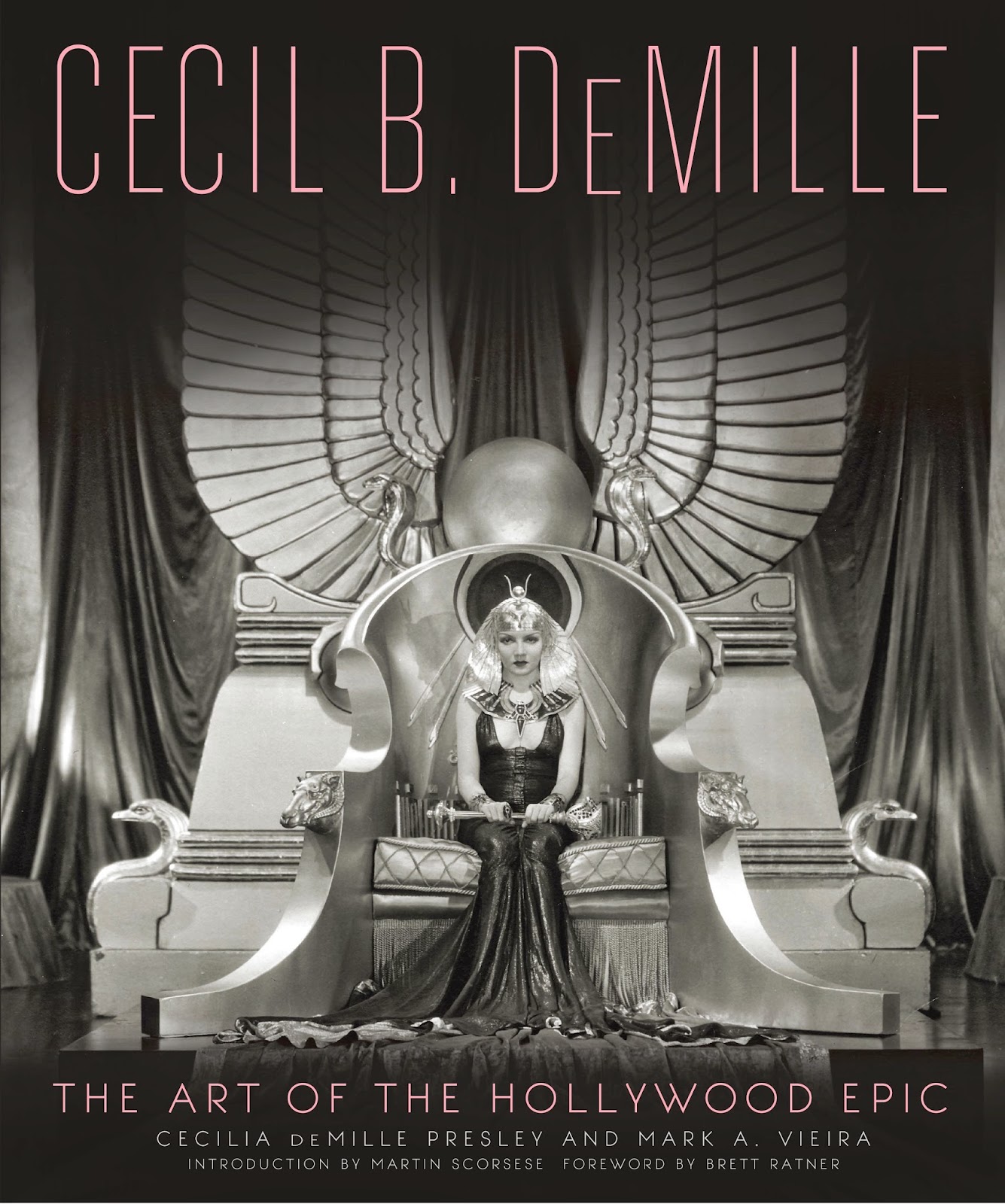 It was an interesting year in film books. I tried to take it a little easier in 2014: to review fewer titles and be a bit more selective.I was somewhat successful, but there were so many irresistible books that came out over the past twelve months. It always amazes me how much there still remains to be told about classic Hollywood, and how many dedicated authors are out there working to tell those stories.

In no particular order, here are the ten new film books that inspired me the most this year. I've included excerpts from my reviews, the links got to the full reviews:

Cecil B. DeMille: The Art of the Hollywood Epic, Cecilia deMille Presley and Mark A. Vieira

This is the most beautiful book of the year, so stunning to look at that I had people glancing over my shoulder as my friend and I drooled over it in a coffee shop. That is not to discount the text though, which could stand on its own with nary a pencil sketch to support it:

Perhaps the most remarkable thing about DeMille was that he never faded away. He filmed the first feature in Hollywood and, unlike his contemporaries, at the end of his life he was launching some of the most magnificent productions the town had ever known. His was a career of unmatched popular success, and if the critics didn't always appreciate his style, he would sometimes manage to win them over as well.

The Art of the Hollywood Epic captures this career, and the fascinating man behind it in deeply satisfying detail. The book is stunning to look at, but it also has soul. 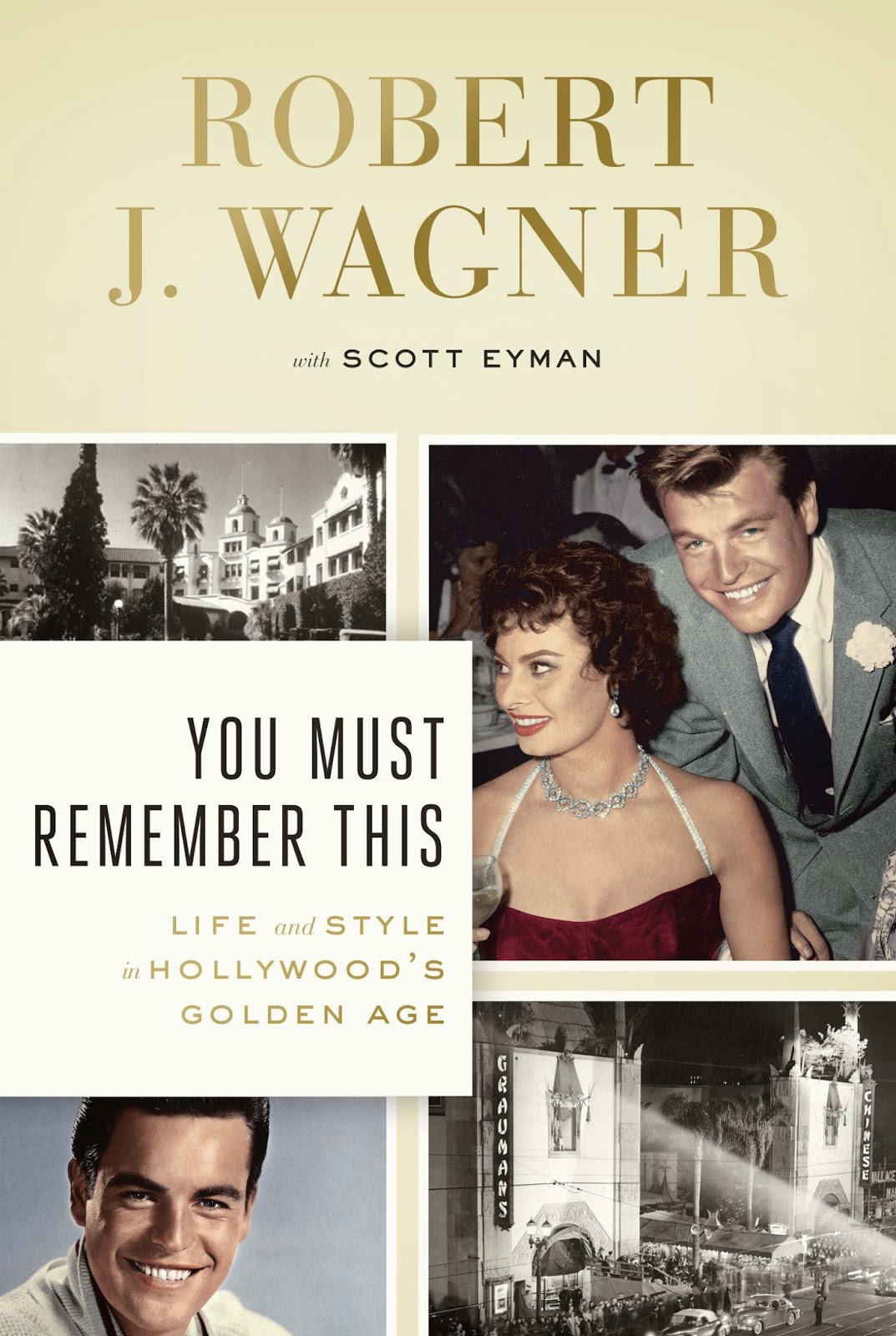 You Must Remember This: Life and Style in Hollywood's Golden Age, Robert Wagner with Scott Eyman

I have happy memories of this book because I read it on the plane as I returned home from TCM Film Festival 2014, my first time at the event. It couldn't have been a more appropriate choice, as Wagner's good friend Robert Osborne makes an appearance in the hilarious prologue:

As Hollywood and its glamour were a part of Wagner's life from an early age, he slid into the culture of the film industry with relative ease. Successful, but never a huge star, he is in the perfect position to tell this story. You never feel that he is name dropping when he talks about his glittering social crowd, it is simply a record of his world, one in which he felt at home. He shares the high times, while also remembering the days when he depended on the kindness of restaurateurs who were willing to run a tab for starving actors.

It's a remarkably easygoing read considering how much historical detail Wagner shares. This is a history book, but it's holding a martini. There's a lot to learn here and it was fun taking it all in. My Life With Princess Grace of Monaco, Joan Dale

I enjoyed reading this fascinating and bittersweet account of life with Princess Grace of Monaco as told by a longtime friend:

In My Days With Princess Grace of Monaco, much as with Grace, Howell Conant's book of intimate photos, you get a glimpse of the real woman. Using correspondence, journal entries and her own unforgettable memories, long time friend Joan Dale shares her memories of the times she spent with the princess in Monaco and around the world. She reveals a Grace who dazzles with her personality as much as her beauty. A kind, generous soul who values service to those in need, simple pleasures and above all, family life. 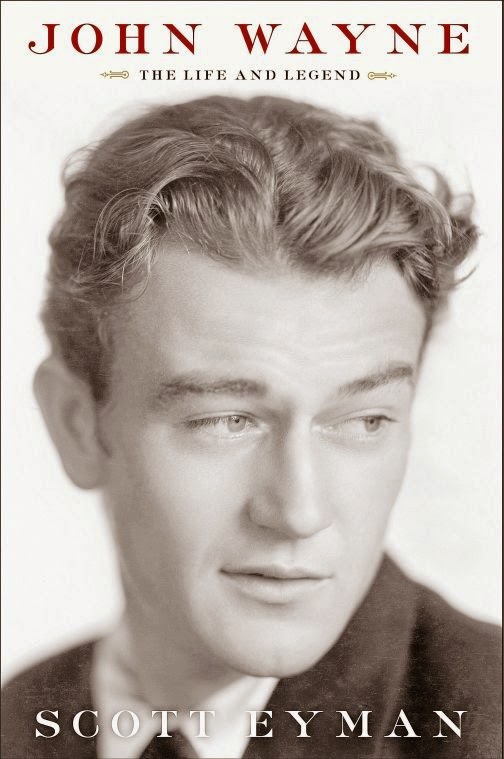 I've never been a big fan of John Wayne. It isn't that I don't like him. I've just tended to respect him more than I enjoy him. After seeing a stunning screening of Stagecoach (1939) at TCM Film Festival and reading Scott Eyman's definitive biography, I have so much more appreciation for both the actor and the man:

One of the most common claims made about Wayne is that he wasn't much of an actor, because he always played himself. Eyman concedes that the star did craft a persona which suited his values and reflected much of his true personality, but also shows how that was simply a starting point for a diverse group of characters. The real Wayne was rarely obscured by his roles, but he worked hard to craft distinct performances with a combination of skill, strong work ethic and an instinct for knowing what worked on the screen. 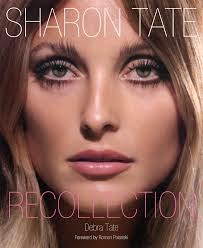 This is a wonderful tribute to the remarkable actress Sharon Tate which focuses on how much she accomplished in her 26 years of life:

It's always frustrated me that the events surrounding Tate's death have so thoroughly overshadowed what she accomplished in the years before. The blossoming actress made an enduring impact, primarily as one of the great beauties of her generation and as a bold fashion influence, but also for her remarkably pure perspective on life and dynamic screen presence....

In Sharon Tate: Recollection, the actress's sister Debra has compiled a collection of photos and memories from those who knew her, while adding her own fond reminisces about her famous sibling. It's a much-needed tribute. 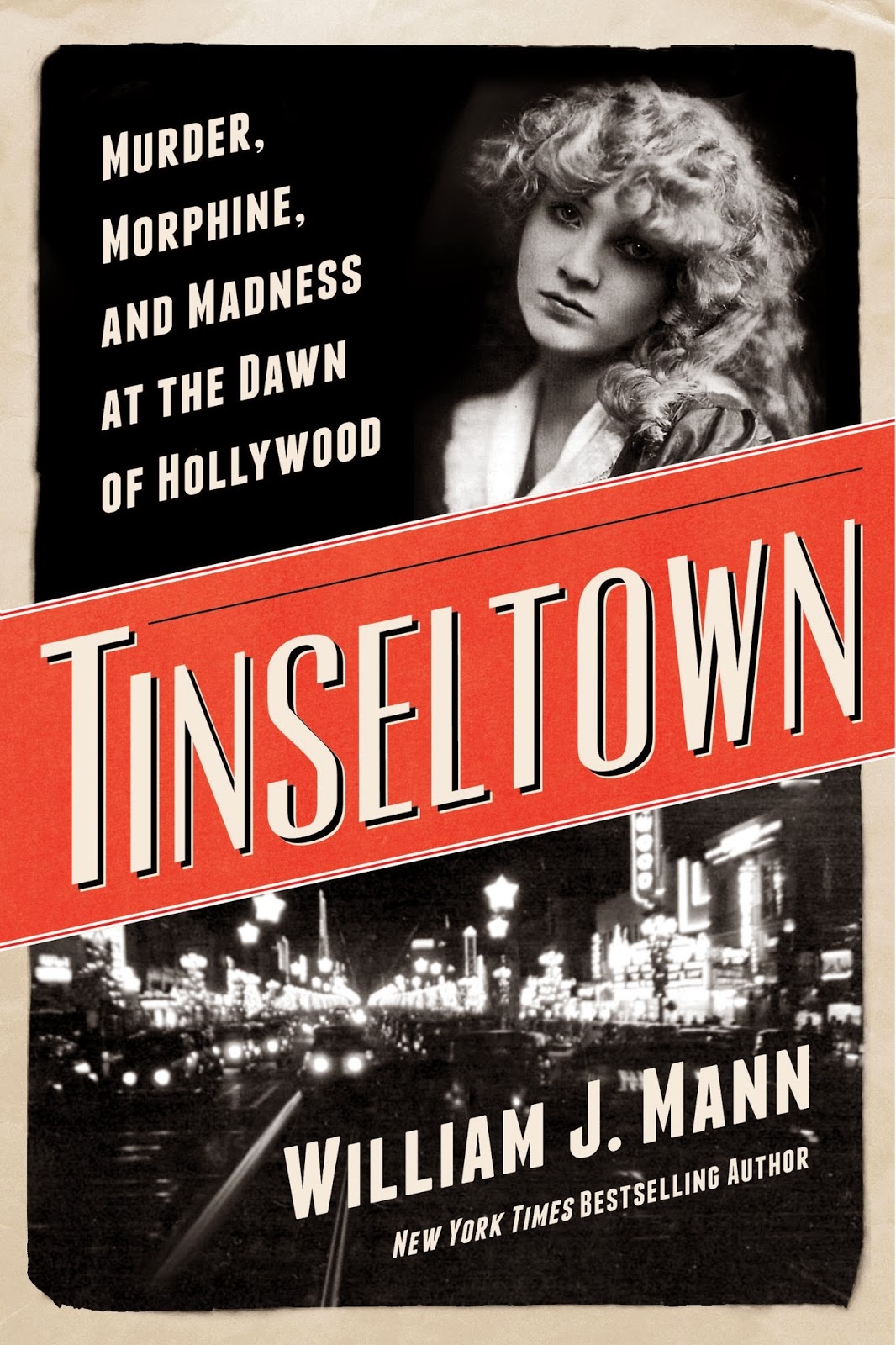 This novelization of the investigation of the still unsolved murder of silent era director William Desmond Taylor was the surprise of the year for me. I expected a cheesy dramatization, but this was a great page-turner:

While Mann's diligent detective work is admirable, it is the smooth construction of the book that makes it work. He writes beautifully, with a good sense for mood, suspense and the emotions of his real-life characters. I'd love to see his take on other classic Hollywood stories. 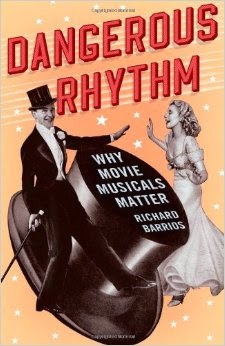 This might be the most enjoyable read of the bunch this year. It was written so engagingly that made me want to have a long conversation about movie musicals with author Richard Barrios, though really, after I reluctantly finished the last page, I sort of felt like I already had:

Dangerous Rhythm covers an extensive history, with lots of background and fascinating tidbits, but it reads like an upbeat monologue. Its academic elements float along, buoyed by Barrios' humor and lively passion for his subject. It was fun to read, but I finished the book with so many notes about new things to explore that it was as if I'd just taken a film history course. 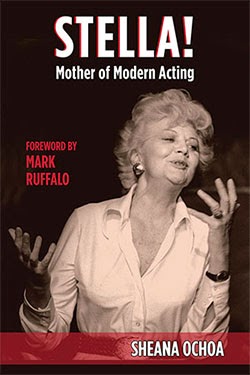 Though legendary acting teacher Stella Adler did not appear in many movies herself, her method was a huge influence on Hollywood. I liked how this biography dug deep into her impact while offering a remarkably revealing portrait of the woman. I got a good feel for her personality and how she affected others:

Adler lived as a star: possessive, imperious, demanding and magnetic. She was a challenging personality, but she made up for that with a ferocious dedication to acting, and helping others to develop their craft, that was astonishing. Stella was born into the theater; she lived it, nurturing it tirelessly and for a lifetime. 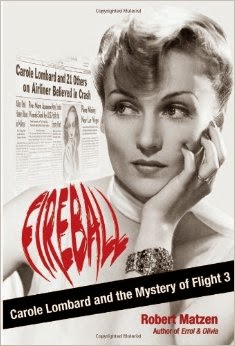 Fireball: Carole Lombard and the Mystery of Flight 3, Robert Matzen

After years of reading rumors and misinformation, it was fascinating, though also horrifying, to read a full account of the air crash that killed Carole Lombard, her mother and several soldiers, among others:

I don't know if I've been brought to tears as many times reading a book as I have this one. Learning the stories of all who were involved, from the crash victims to family and friends was moving, but also unbearably sad. It was a great show of respect to tell all 22 stories and to acknowledge the enduring effects of this unfortunate event. I'm glad I know what happened, and that I now understand the true impact of the crash, but that knowledge haunts. 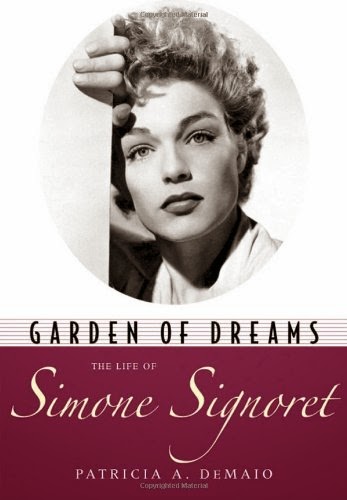 Garden of Dreams: The Life of Simone Signoret, Patricia A. DeMaio

I knew very little about Simone Signoret upon starting this book, mostly rumors about the affair her husband Yves Montand had with Marilyn Monroe. In many ways, she is still a mystery to me, but I feel I better understand this rebellious woman whose passions were often at war with her intellect:

The uneven affections between [husband Yves] Montand and Signoret would have a deep impact on her life. While DeMaio devotes satisfactory attention to the actresses' work in classics like Les Diaboliques (1955) and late life successes such as La Veuve Couderc (1971) (in which she seduces Alain Delon), she is aware that acting was not the central focus of Signoret's life. At times it is almost as if the book is a dual biography, and there is no other way to properly address her story. She was deeply intertwined with her husband.


What film books did you enjoy this year? I'd love to hear about them!