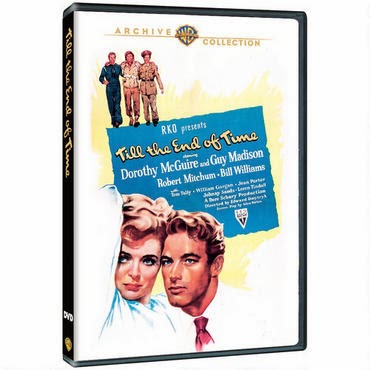 I was drawn to the new Warner Archive release Till the End of Time (1946) almost entirely because it features Robert Mitchum in an early supporting role, a year after his breakout in Story of G.I. Joe (1945). Other than that, I was happy to see Dorothy McGuire in the cast list, but not so excited by the prospect of watching veterans struggling to adjust to life after World War II. It all seemed so depressing. Fortunately I had Mitchum to draw me in, because while this is in many ways a sad film, it is also inspiring and deeply touching.

Star Guy Madison made his screen debut in Since You Went Away (1944), another film that explores war from the home front, but spent the bulk of his career in westerns. Here he is Cliff Harper, one of three veterans who continue their friendship as they adjust to life at home again. Bill Williams is a former boxer who has lost his legs in combat, while Robert Mitchum plays a cowboy with a steel plate in his head. Though not officially a part of this trio, as traumatized war widow Pat Ruscomb, Dorothy McGuire is as lost as these men who have lived to come home.

While Cliff gets plenty of attention from the perky 18-year-old girl next door, he is drawn to Pat's gravity. He is still childish in many ways, but war has also matured him, and the melancholy widow gives him the understanding he needs as he readjusts to civilian life. Eventually, he is able to understand her aimlessness as well.

The film has its share of heat: arguments, frustration and even a wild bar fight, but for the most part it unfolds quietly. It treats its subjects gently, just as the townspeople do their newly-returned soldiers. There's a tenderness to its characters, even when, as with Harper's parents, they are baffled by the veterans' behavior.

While the movie doesn't look for solutions to the problems of returning soldiers, it offers hope. The wounds these men, and those at home, suffer will not completely heal, but time will help. The boxer won't wear his new prosthetic legs because they hurt him, but he throws them on and charges out of the house when he thinks a friend needs him. Mitchum's character lives recklessly, and in pain, but his buddies watch out for him, and you know they're not going to let him destroy himself.

Cliff's problems are more subtle. He struggles to stay employed, and to accept Pat's way of mourning, because the years where he should have been building an understanding of these things were spent at war. He's never in any real peril, his family will always support him, but his struggle is significant, because it shows how no matter the state of the soldier's bodies when they returned home, they all had psychic wounds.

All of the performances are strong. McGuire is especially touching in her role, and Mitchum steals all of his scenes, clearly showing the birth of a star. He seems to have started his film career fully-formed; there's little sign of a novice here.

I hope that this film will get more attention now that it is available on DVD, because it is certainly deserving of classic status and a good, low-key companion to that more legendary return from war drama The Best Years of Our Lives (1946).