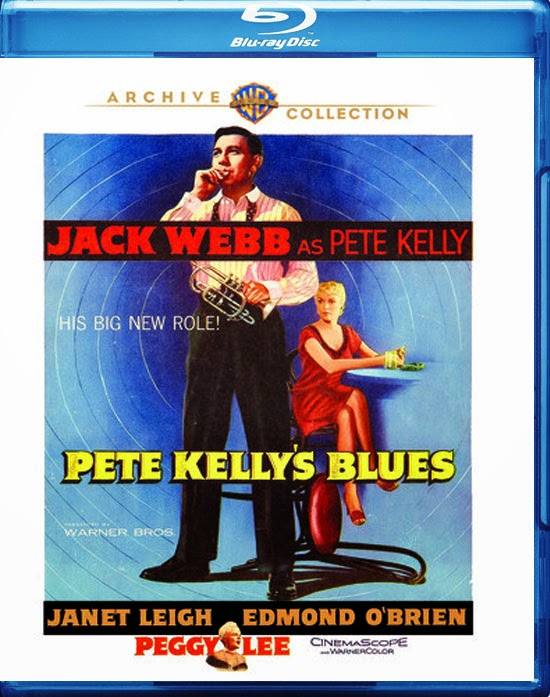 Jack Webb directs himself in the title role of this Jazz-age, gangster crime flick, now available in a gorgeous Blu-ray from Warner Archive.

As Kelly, Webb is a coronet player and leader of a speakeasy jazz combo. His life becomes more complicated when gangster boss Fran McCarg (Edmond O'Brien) starts pressuring him for a cut of his profits. He gives in, and ultimately causes tension that endangers his band, including the killing of his hot tempered drummer (Martin Milner), a tragedy which drives away his clarinetist (Lee Marvin).

In the midst of all this drama, rich flapper girl Ivy Conrad (Janet Leigh) decides that for some reason she must have Kelly. That was difficult for me to wrap my mind around, unless she was a huge music nerd. Webb does have an odd sort of charisma, but nothing about him screams romantic lead. I liked Leigh in this role though, she could have been a brat, but she comes off sympathetic, a party girl who knows she needs to find something more substantial than the shallow life she is leading.

Tension in the band increases when McCarg insists his moll Rose Hopkins (Peggy Lee) sing with Kelly's band, that is, until they hear what she can do. Abused and bullied by the gang boss, Rose survives by drowning her sorrows in booze, but her talent flows so naturally from her that it takes an enormous bender to bring her down. Whenever I see Lee act, I always think how nice it would have been if she'd done more movie roles, but then I hear her sing, and I know she spent her time the right way. She's effective as an actress, but absolutely transcendent as a vocalist and it was exciting to see her in action.

It is music interludes like Lee's, and a couple of even more astounding tunes sung by Ella Fitzgerald that make this film must see. It is such a treat to see these singing legends do their thing in a colorful, beautifully filmed production. Fitzgerald is an especially exciting presence, as she belts out Hard Hearted Hannah with beads of sweat glittering from her brow. She makes you feel the heat and excitement of the smoky club atmosphere simply by being herself.

On blu-ray the film has much more depth than I remembered from the VHS edition. It almost pops out like 3-D. The colors were vivid almost to the point of being distracting. I'd sometimes find myself ogling a red velvet chair or a being mesmerized by a green desk pad instead of following the action.

I thought the cast, while strong, was an odd mix. Andy Devine plays against type as a tough police detective, and he tones down his famous quavering voice to achieve a great menacing effect, but he always seems perched at the edge of the movie, never really a part of the action. While Lee Marvin is always an enjoyable presence, I couldn't buy him as a clarinet player. Would he have ever had the patience to sit an practice that thing? I know he had the meatier role, but he'd have been a better fit as the drum player. I never could get Leigh and Webb as a couple either. All these performers are good, but they don't seem to belong together. It all feels unfinished.

Webb did amuse me though. He's an odd actor. Usually he seems emotionless on the surface, but there's never any doubt as to what he's feeling. Somehow he is communicating with his audience. I think part of it is that there's always a bit of a wink behind that straight expression.

He's a funny screen presence, it doesn't seem to suit him as well as television did. His head is a bit too large for his body, he shuffles around like he's attached to a board, and I laughed every time he put the beat down on a man twice his size. It had the effect of wish fulfillment: a tiny, funny-looking guy being wooed by a gorgeous woman and playing hero. I loved him for bringing that dream to life, as implausible as it seemed. 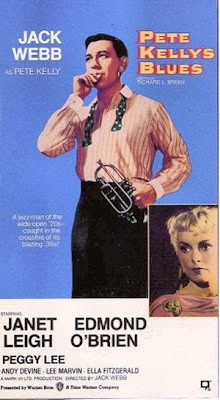