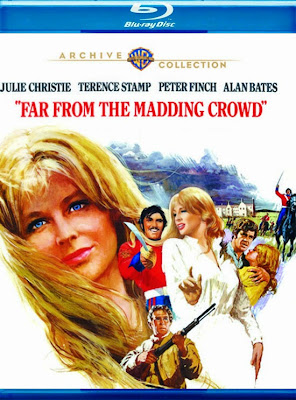 The pastoral romantic epic Far From the Madding Crowd is now available on Blu-ray in a new release from Warner Archive.

Based on Thomas Hardy's first literary success, the film stays close to the novel's plotline, taking its time, but moving along smoothly through its nearly three hour running time. Set in the countryside of England during Victorian times, it tells the story of Bathsheba Everdene (Julie Christie), the strong-willed owner by inheritance of a large farm and her romantic entanglements with three men.

In his review of the film Roger Ebert called Julie Christie, "too sweet and superficial" to handle the complexities of playing Bathsheba. While I haven't read Hardy's book, and can't comment on whether Christie captures Everdene as conceived, I thought that the way she used sweetness to charm, while often behaving in a less becoming way, was a good choice.

She plays a woman who doesn't know the extent of abilities: for attracting men, for feeling passion. She doesn't see how her sweet nature draws admirers and conceals her more turbulent personality. While she knows that she is strong, the complexities of that strength are not yet clear to her, and Christie effectively communicates her developing awareness of herself and the way she affects others.

The men who romance her, Alan Bates, Peter Finch and Terence Stamp are also well cast. As a sheepherder who is at first overconfident in his ability to win Bathsheba, Bates is cast against type as Gabriel Oak, a strong, decent man who otherwise is rightfully certain of his skill and what he has to offer. Finch is appropriately tense and awkward as Boldwood, the neighboring gentleman farmer who takes Bathsheba's joke valentine too seriously and becomes romantically obsessed with her. There's a dangerous hint of sociopathy to Stamp's portrayal of a reckless sergeant, who faces tragedy before he begins to regret his behavior.

Director John Schlesinger has created a beautifully detailed world. You can feel the weight of the farm work and the cast performing it looks authentic, as if he came upon them all by chance and decided to turn on the camera. Aided by director of photography Nicholas Roeg, who would eventually become an accomplished film director himself, he captures a heightened landscape, in which the light turns blades of grass silver and sun rays appear to reach out and caress Christie's face.

The gorgeous spectacle of it all just about distracts you from the curiously flat feel of the drama. Though it centers on romance, it seems lacking in passion. Even in a famously thrilling scene where Stamp demonstrates his skill with the sword by repeatedly endangering Bathsheba, there is excitement, but somehow the romantic element doesn't ignite. You understand why this reckless man would get her blood pumping, but you don't feel it.

It is enjoyable to watch the film though, because Schlesinger trusts his audience to understand all that is necessary. He lets the world of his characters unfold with natural ease. When Bathsheba's sheep begin to collapse from bloat, you don't get a lecture about the danger of livestock eating clover, but the urgency of the situation is made clear. In one of the most revealing moments, Bathsheba and Gabriel work frantically together to save her barley ricks, and you can see how well matched they are, even if there is no moment when the music rises and they lock eyes. In the upcoming version of the film starring Carey Mulligan, the scene has that moment, and loses the subtlety of their strengthening connection.

The picture is sharp and clean, but with enough grain to retain the nostalgic, bucolic feel. This is an extended version of the film, with three additional minutes that were not included in the original North American release. Special features include a trailer and a featurette made at the time of filming, with footage of Christie examining the filming locations.

Far From the Madding Crowd is a lush, inviting film and deserving of a wider audience.