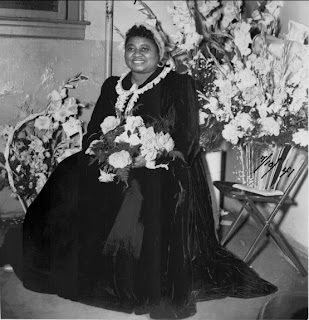 Of all the African American women who were relegated to maid and mammy roles in the studio age, there was no one more capable of dominating a scene than Hattie McDaniel. Her persona was that of the opinionated, aggressive domestic, a self-confident woman who was also quite often the only person in the room with any common sense. As Barbara Stanwyck quipped in The Mad Miss Manton (1938), after getting a characteristic bit of sass from McDaniel, “in my house, the revolution is here.” It wasn’t really, but despite the maid’s uniform, she did distinguish herself enough to get things rolling in the right direction.

McDaniel famously said “I’d rather make $700 a week playing a maid than $7 being one,” and that statement neatly describes the contradictions of her legacy. She was a pioneer: the first African American both to be nominated for an Academy Award, and the first to win, not to mention the first African American woman to have her own radio, and eventually television, program. However, she had to walk from a table in the back of the room to claim that Oscar, and though she had her own show, it was as the maid Beulah, a character driven by the actions of her employers. It was if every lift she got came with a slap, but she handled these slights with dignity.

If McDaniel felt conflicted about her screen image, she didn’t reveal that to the general public. She was proud of her success and the lavish lifestyle that it afforded her. Her friend Lena Horne said, “She had the most exquisite house I’ve ever seen in my life. The best of everything.” Horne also remembered McDaniel telling her that, “I’m a fine Black mammy [on screen]. But I’m Hattie McDaniel in my house.”

Despite the controversy surround McDaniel's screen image, I tend to view her work in a positive light. She had such powerful charisma that I feel she was often able to transcend whatever role was handed to her. In some cases, she would simply steal the scene from her white co-stars.

My favorite example of this is in her one scene for Alice Adams (1935). In it, McDaniel is a maid who has been hired by Katharine Hepburn to impress the wealthy Fred MacMurray at a family dinner in her modest home. McDaniel listlessly trudges around, looking bored and chewing gum, but she is also able to indicate with a few glances that she is keenly aware that the evening is headed for disaster. Her disdain for the proceedings and the lace cap drooping over her forehead provide huge comic relief in a scene that would have otherwise been unbearably awkward.

It is this sort of performance that leaves me convinced that Hattie McDaniel did as much as she could within the system to demonstrate that African Americans could be a greater credit to the industry if they were only given the opportunity to do so—and I think she accomplished the feat with marvelous grace.

(I hope it’s true that Mo’nique is going to leverage her new status to make a biopic about Hattie McDaniel. That could be a fascinating project.)
Posted by KC