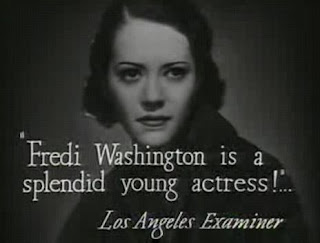 I’ve always been frustrated in my efforts to get a satisfactory glimpse of actress Fredi Washington. She was blessed with beauty, intelligence and talent, but these qualities were not sufficient to make an African American a leading lady in the Hollywood of the thirties. With her pale skin, straight hair and green eyes, Washington was often encouraged to pass for white, but she was admirably steadfast in her determination to be herself.

Savannah, Georgia-born Washington began her career as teenage cabaret dancer in 1920s New York. She won a role opposite Paul Robeson in the stage play Black Boy when a producer discovered her performing in a nightclub (she would later play a small role opposite Robeson in The Emperor Jones (1933)). A dance tour of Europe followed, after which she returned to New York to work as a stage actress. She made her first movie appearance, as a tragic dancer, in the musical short, Black and Tan (1929) with Duke Ellington (she also had a passionate affair with the legendary musician).

By the early thirties, Washington’s notoriety was sufficient to attract the producers of Imitation of Life (1934), who were looking for a light-skinned African American actress to portray Peola, a young woman who attempts to pass for white in order to find better opportunities. Washington accepted the role happily, if not eagerly. She temporarily took up residence with Louise Beavers, who helped her to adjust to life in Hollywood. Though Washington’s experience on the Imitation of Life set was agreeable, and her performance won her raves, she was not offered another substantial role.

As Washington was determined to avoid playing maid roles, she had few prospects for screen work. The intelligent actress also had no intention of waiting around Hollywood for a role that would probably never appear, so she moved back to New York. There she returned to the stage, triumphing in Mamba’s Daughters, opposite Ethel Waters. However, there would not be many strong roles to follow.

With a satisfying acting career out of her reach, Washington funneled her energy into making the entertainment world more accommodating for other African Americans. She helped to found the Negro Actors Guild, and she fought hard for black entertainers. She also became a writer, serving as drama editor and columnist for The People’s Voice, a weekly newspaper published by her brother-in-law Adam Clayton Powell Jr. She eventually married a prominent lawyer and settled into a private, though not secluded life in Connecticut.
Posted by KC