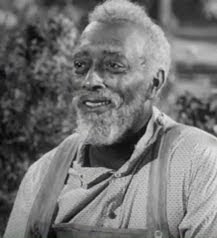 Juano Hernandez had such a powerful presence that I always forget that he was primarily a supporting player. Though he was capable of disappearing into a large cast, more often than not he made a leading man’s impact with just a few lines. He was a versatile actor, and a solid talent, but I sometimes think the bulk of his appeal really came down to his eyes: sad, wise and still.

Hernandez would have had a fascinating life without Hollywood. In fact, his movie days are just about the least interesting part of his story. Born in Puerto Rico in 1901, he was the self-educated son of a seaman. He spent a good piece of his childhood in Brazil, where he performed on the street for coins. As a teenager, he joined a Cuban circus, which somehow brought him to the American vaudeville circuit.

Vaudeville led to work at the Cotton Club, and eventually Broadway, were Hernandez performed in the chorus of the 1927 production of Show Boat. He also appeared in the popular African American stage extravaganza, Blackbirds. He was also one of few African Americans of the time to find steady work as a radio performer.

When Hernandez made his first big movie in Hollywood, he was nearing his fifties (though he had appeared in a handful of “race” films earlier in his career). Still, it did not take him much time to make an impression. Perhaps his proudest legacy is that his screen persona was a big step away from the submissive servant roles most African American men played at the time. He was not without humility, but more often than not, his characters were quietly confident and emotionally intelligent men who found their way in society without bending to the white man.

Hernandez did not make many movies, but he was fortunate enough to appear in several high quality productions. Here are a few of his most remarkable performances:

Hernandez made a memorable impression in his first major movie role, an adaptation of the William Faulkner novel about an African American man who is falsely accused of murder. His very entrance is impressive, a slow camera span from the tips of his boots to his silent, wise face. Hernandez’ character is a proud man, but even more importantly, he is aware of his self-worth. He does not pander to the white man, which enrages several of the townspeople. In fact, it is clear that while he may be in jail for suspected murder, these people would just as soon see him hang for his pride. I can think of hardly another leading man who moves with the confidence of Hernandez in this role. He looks as though he were incapable of flinching, let alone doubting himself.

As a humble sharecropper in danger of losing his land to a greedy miner, Hernandez is less steely, but no less sure of his purpose in this small town drama. When faced with an angry mob determined to strip him of his property, he demonstrates the courage required to face your enemies and refuse to fight. However, this man would never claim to be heroic in any way; he makes it clear to his benefactors that he is simply set in his ways, and would rather die than change. Hernandez manages to make his character seem simultaneously frail and powerful.

As a participant in the violent Mau Mau uprising, Hernandez takes a passionate departure from his typical strong, silent characters. He has an otherworldly energy in his brief scenes, as if he is listening to the advice of spirits. Those soulful eyes compound mesmerizing effect of his presence.