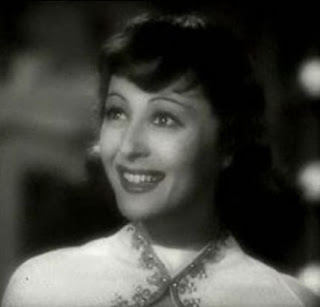 There was no one quite like Luise Rainer in old Hollywood. She wasn’t, and could never be a “type”. She was exotic, but in a softer way than Dietrich—and more earthbound than Garbo. She was also lively, but with more reserve than Lombard, and less confidence than Colbert.

Rainer was her own woman, and her strong individuality both brought her enormous success and led to the destruction of her career. She was the first actress to win an Academy Award two times in a row, and yet her pants-clad rebellion against glamour-obsessed Hollywood and control-obsessed Louis B. Mayer put her career on a downward spiral that was as fast as her rise to the top.

With sparkling, darting eyes, shaped like two sideways half moons, she brought an unusual, gentle charisma to her roles. In her most readily available movies: The Great Ziegfeld (1936), The Good Earth (1937) and The Great Waltz (1938), she played the self-sacrificing, beleaguered wife, but always with an aura of power about her. You get the impression that these characters are wiser, and more in control than appears on the surface. Or perhaps she could never submerge her own strength in her performances?

Though Rainer was known as “The Viennese Teardrop”, she had a lightness and agility that would have been marvelous in comedies. You get a glimpse of that ability in Ziegfeld, where as singer Anna Held she shimmers with uncertain energy and somehow manages to be guileless and calculating at the same time.

Rainer herself has expressed regret that she did not fight harder for a career, but I sometimes wonder if it is best that she stayed true to herself and ditched the Hollywood game. Whatever the case may be, her early, record-making success will ensure that she is not forgotten.